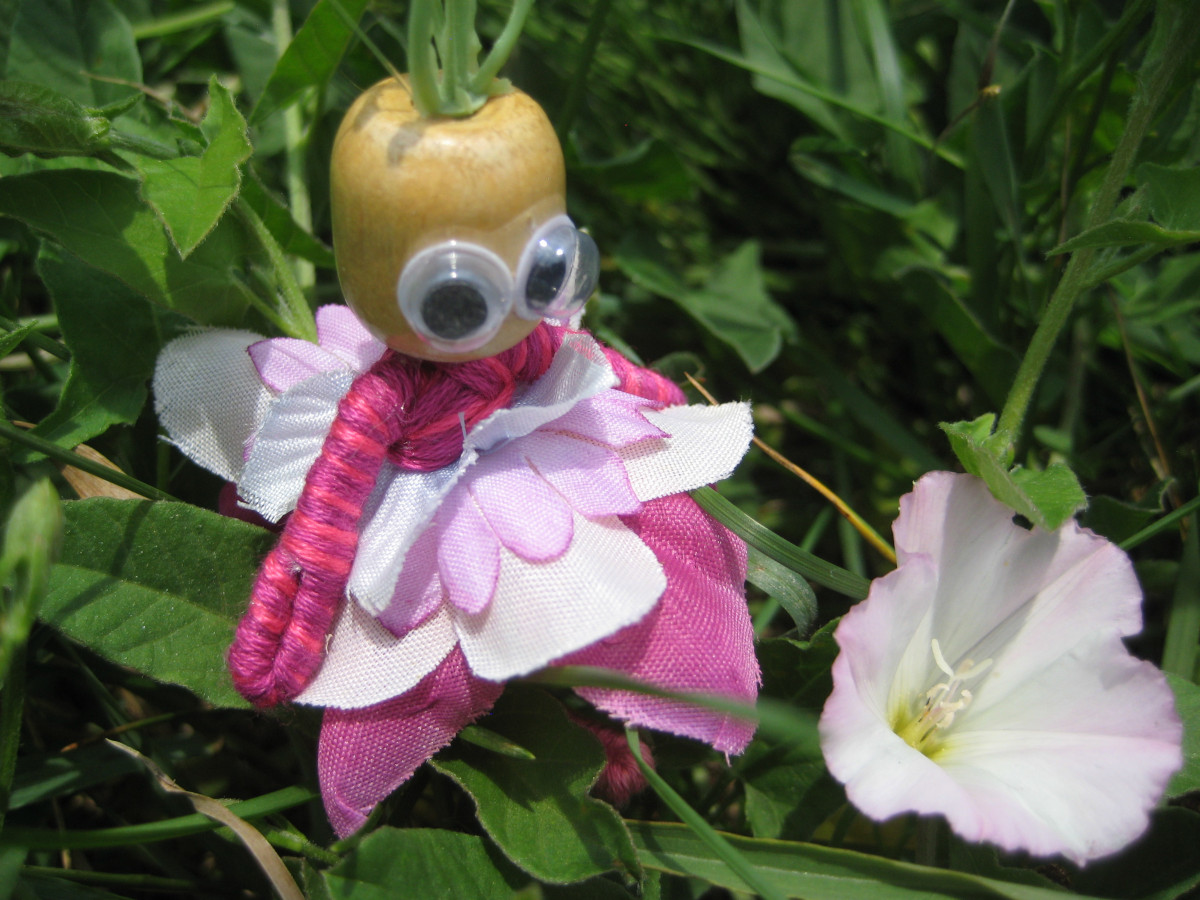 I’ve been using artificial flowers to dress my wee fairy folk for decades and gently cleaning them was simple. But a while back, I thought of using them on clothing for human bodies, and that’s when I needed to know, are artificial/silk flowers washable? Here’s what I learned and how I tested it:

Since the 1970s, most fabric fake flowers have been made of polyester rather than silk. Although the materials I work with are all second-hand, it’s still pretty safe to assume that the fabric flowers in my stash are all polyester. The older flowers tend to be paper, cellulose, or heavily glued velvet – not at all washable but also not suitable for sewing on clothing.

Fabric flowers are assembled from a stack of petal “circles” stacked on top of each other with some smaller plastic “discs” between some of the layers to shape the flower. A stem and plug lock them together. I removed all the plastic parts and set them aside for the fairies. It was just the fabric petal circles and leaves that I hoped to use on clothing. (Any flowers that frayed or fell apart at this stage were discarded.)

I selected a variety of flowers and leaves for testing, making sure that I covered all the bases:

I then pulled a few pieces out of my fabric scrap bin looking for variety there too: t-shirt, velour, broadcloth, organza, and a printed denim.

The next step was to consider the different ways I might want to attach flowers to clothes and test them too. It would not be an exhaustive list but I would at least find out if the attachment method had much effect on how well the flowers withstood laundry. Here’s what I used to attach the handful of flowers to the fabric scraps:

I also varied the stitching patterns and the number of layers in each stack.

After taking some photos to document the “before” look (that’s the part I usually forget to do), I tossed all my test pieces into the washing machine along with my next load of laundry. Real silk often leaks dye when it gets wet but polyester doesn’t so I wasn’t concerned about discolouration. I wanted to see if they fell apart.

Everything looked fine after a regular cycle cold water wash so I tried the dryer. They survived that too. There was a little fraying around the edges of some of the pieces, but nothing disintegrated. I took some more photos and then set up a tally sheet. How many trips through washer and dryer could these flowers handle? It’s no good calling something washable if it falls apart after three washes.

I kept the test pieces beside the laundry detergent. Every time I was going to do a load that used both washer and dryer, I would toss the pieces in and mark another tick on my tally sheet. There was no noticeable difference between the first and second washes so I didn’t bother to take more pictures. After ten washes, there was still not enough difference to bother with photos.

After forty trips through both washer and dryer the flowers were noticeably frayed but they still looked like flowers. The leaves held up remarkably well, especially the ones that started with a glossy coating on them. There were some snarls of loose threads and long hair in the petals and around some of the buttons and beads. Those had to be carefully removed so the stitching wasn’t damaged. (When I pulled too hard on one of them, a thread broke and I lost some beads.)

I had expected the thin daisy-like petals to come apart right away. Most of them didn’t, but the big round petals that taper to almost nothing where they join in the center, looked like those big petals might get tugged off if they caught on something. So now, when I use them, I sew through the petals instead of only stitching in the middle of the flowers.

Are artificial/silk flowers washable? Absolutely yes! I still dress my fairy dolls in flowers but now I use them for people clothes too. To see some samples, click here.

Remember that pit in your stomach when someone jostled your elbow and, in a split second, a favourite outfit was condemned to never being worn again? A splash of wine, a drop of grease, a smudge of ink, and you knew it wasn’t going to come clean. Did you discard it immediately, or add it to a pile of “if only…” garments – things you can’t wear as is, but can’t bear to give up on? Working with “if only…” garments is my specialty and this post shows one of many ways I rescue stained clothing using those stains for design inspiration.

The skirt in this example came to me with rust stains scattered across it. The gauzy material was not going to withstand heavy stain-removal tactics so the barely-worn skirt was supposedly headed for the scrap bag. Instead, I wanted to bring it back into circulation as a stronger form of itself.

My first impression of this skirt was its very feminine frilly texture. I thought that called for a soft and almost monochromatic treatment, so I went to my stash of fabric flowers and pulled out a handful of suitable pinks. Instead of using the flowers as is, I took them apart and re-combined the petals into entirely new flowers. These weren’t nearly as bulky as the original flowers and their texture was enhanced.

Next, I went to my basket of embroidery floss and pulled out more pinks and some bright pollen yellows. It took no time to discard the yellows and focus on the pinks. Botanical accuracy wasn’t the goal here, and the contrast was too jarring. Instead, I selected some golden glass beads to add to the flower centers. The beads would cover up the holes in the middles of the flowers, and they would hint at dew drops and pollen without clashing with the narrow colour scheme. My embellishments were ready. It was time to tackle the skirt.

The skirt was as clean as it was going to get. I spread it out in a well-lit work area and carefully inspected it for stains and any other damage. Every spot got marked with a pair of brightly coloured pins. (Two pins so if one fell out, there was another for backup.) When all the trouble spots were pinned, I had a map for flower locations.

Every spot got covered by a flower and then more flowers were added to pull the “scattering” together. I wanted drifts of flowers, not splotches or a solid bush, so I played with the arrangement until I was happy with it. Then I pinned it securely, and put it on a mannequin so I could see how the design looked “in 3D” and from many different angles. A few adjustments, and the flowers were ready for stitching.

My needle needed to be sharp enough to pierce the tightly-woven flowers without pulling threads, large enough to carry several strands of embroidery floss, yet fine enough to fit through the holes in the beads. (That’s why I can have twenty needles at hand and still be looking for a different one.) Every flower was attached to the skirt with a round of lazy daisy stitches topped off with a bead to cover up the hole in the middle of the petals. This left the petals free to move while adding decorative interest to their centers.

When the stitching was done, the skirt was ready to wear again, and most importantly, it was also still hand-washable. I’ve done some testing on the durability of fabric flowers through machine washing and drying and most of them perform very well. (I’ve written a separate post about that testing. You can read it here.) So the flowers could handle machine washing but the skirt itself could not. Also, cotton embroidery floss should be pre-shrunk or replaced with several strands of standard sewing thread if you are not washing by hand.

The other consideration for washability is the beads. Most glass beads can withstand a fair bit of wet and heat. Some plastic beads don’t do so well with the heat of a dryer. Harsh detergents can do more damage than the water or the dryer heat, especially if metallics are involved. So if you’re trying this for yourself, consider how you want to clean the garment when you are selecting what you want to decorate it with. If you want to wash and dry by machine, make a test swatch of your materials and throw it in with a few laundry loads to see how the components hold up.

This “drift of flowers” technique is very handy. You don’t have to be able to draw to use it, and it doesn’t have to cover a large area so it can be very quick to do. One client came to me with a velvet cape that was to be worn in a wedding just a few weeks away. The cape had arrived at her door with some black spots on it and anything we could do to remove them would mark the velvet. There wasn’t enough time to get a replacement cape from the original supplier so we covered the spots with a drift of flowers. Not only was it a quick fix, but the client decided she liked the new version better than the original.

So if you’re looking for an easily adaptable way to disguise a spattered stain, you might consider “planting” flowers.